After long hours of development, I have successfully finished a first release of the “SDR Server” (formerly known as “SDR Cloud” system but this name was also chosen by other team).

This software solution is able to share customizable (and programmable) IQ Streams of your favorite radio over the network for remote listening or processing. Currently only my own SDR software can handle the remote connection, but a “extio like” DLL is under work.

SDR streams can be remotely reprocessed and re-dispatched as one “sdr server” can receive and share streams coming from other servers. A script engine accepts JSON requests or script snippets to change its behavior.

Basically the protocol relies on HTTP and uses “application/content-stream” content-types. It means the streams can by sent across network proxies and standard TCP/IP equipment. Samples are sent using a VITA49 like format, with samples encoded as INTs or FLOATs depending on bandwidth.

Here is an example use case : 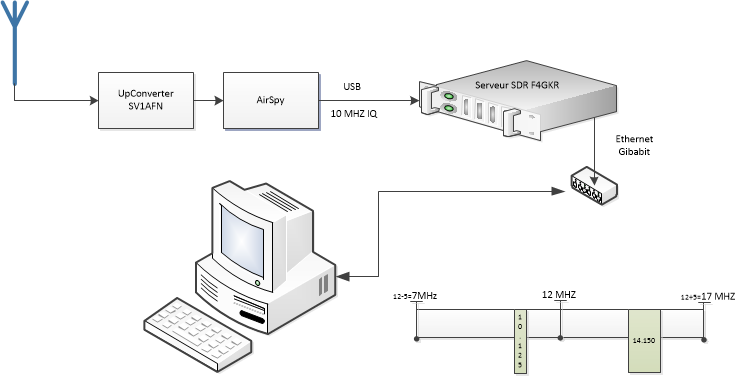 An AirSpy USB receiver is attached to the PC box running the SDR Server software. This AirSpy is fitted with a SV1AFN upconverter, so it is able to receive bunches of 10 MHz of HF at once.

For this demo, the SDR is tuned at 12 MHz, so it can process from 7 MHz to 12 MHz. The server is configured so as to create two IQ substreams :

As the two streams fall inside the 10 MHz of the AirSpy, they can be served over the network simultaneously… That’s what I show below, where two instances of the gkSDR receiver are running on the same remote machine and processing the two streams at the same time. 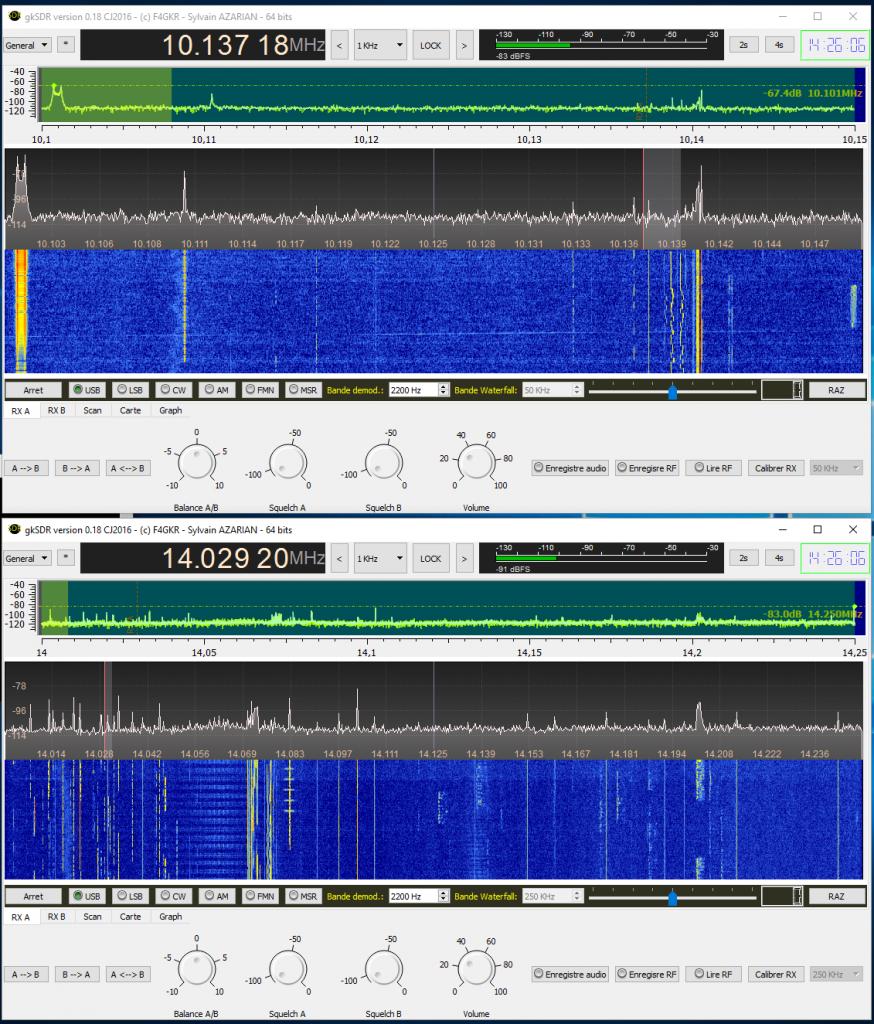 This sharing server is fully web controlled and embeds a script engine to set and configure the streams and possible connections. Just to illustrate what can be done, here is the relevant section of the “boot script” used to declare the streams used in this example :

Basically the boot script checks what hardware is connected and decides what to do.

Note that the server accepts REST queries through a JSON over http mechanism so the settings could have been set manually.

For example, the remote SDR can be tuned with a request like :

Each stream can be shared over multiple clients, as long as the server running the software as enough processing power. To avoid central frequency tuning conflicts, the boot code can decide if the band is locked (as in this example), or not.

This software to share SDR IQ streams over the network is not Open Source and will probably not be free.